History of Special Olympics in Canada

The Special Olympics movement was founded by Eunice Kennedy Shriver, with the very first event held in 1968 at Soldier Field in Chicago. However, the competition was inspired by discoveries made by a Canadian researcher.

In the early 1960s, a group of students at Toronto’s Beverley School became the test group for Dr. Frank Hayden, a sport scientist at the University of Toronto. Dr. Hayden was studying the effects of regular exercise on the fitness levels of children with an intellectual disability.

Dr. Hayden’s research was nothing short of groundbreaking. It challenged the prevailing mindset of the day – one that claimed that it was the disability itself that prevented children from fully participating in play and recreation. Through rigorous scientific method, Dr. Hayden proved that it was simply a lack of opportunity to participate. Given that opportunity, people with an intellectual disability could acquire the necessary skills to participate in sport and become physically fit.

In other words: sport could have a transformative effect on the lives of those with an intellectual disability. 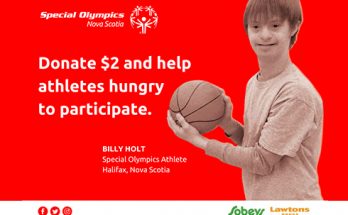 Sobeys, across Canada, wants to raise $1 million for Special Olympics athletes. Are you up for the challenge? From April 1st to the 15th, you can add “support Canadians with an intellectual disability” to your grocery list. In Nova Scotia, …