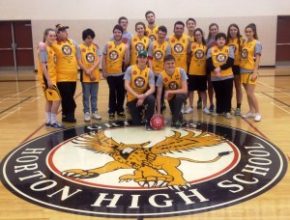 It was just after noon when we entered into Horton High on Wednesday, March 9th carrying two boxes that were to be presented to the students participating in the #playunified sports program at 1:00 pm.  Within the halls of the school, it looks like almost any other high school. Teens all clustered in groups with their friends, posters of encouragement hanging from the walls, and teachers watching ever so closely at the students as they prepare for the upcoming lunch hour.

However, what is different about Horton High is that during the upcoming lunch hour, 17 students will gather for their weekly sports program that welcomes students with an ID to play sports with students without an ID in what is known as Play Unified.

As we entered the gymnasium, students began to ask us if in the box were the eagerly awaited team uniforms that would officially make them feel like a #unified sports team. “Are those are uniforms Matt?  Can we see them now?”

It was easy to sense the excitement and anticipation that was present in the students.  “I have not played on a sports team since I was six years old.  This is the happiest day of my life” says one of the athletes.

For one hour we watched as all 17 members present gathered around the Horton Griffins school symbol in the gymnasium and began your typical sports warm up.

Focusing on basic skills such as passing, dribbling and being a member of a team, each student shared in the joy of everyone’s accomplishments.  “Great catch Jessy”, “Heads-up, Jake”.  For this hour, there were no disabilities – only abilities.  It was a true pleasure to witness.

The #playunified program that Horton High students participate in is part of a new initiative from Special Olympics Nova Scotia, thanks to The Canadian Progress Club – Halifax and our Gov’t of Canada. However, this is a very familiar program within Special Olympics internationally.  The Annapolis Valley Regional School Board has partnered with SONS to pilot the program in three schools this year.  Horton High, Central Kings, and Middleton High School are all working towards creating this program to culminate in one Play unified day at the end of May.

“Looking forward, our goal as an organization is to move the program into other school boards and high schools within our province so that all kids can come together and play”, says Matt Quinn, Program Director. We are thankful to the two students at Horton High who spearheaded the program at Horton High – Emily McArthur and Jake Gordon.  “The largest benefit we see from this program is that it offers a safe environment, free from bullying through sport”, says Jake.  Emily says “I feel very proud of what we have accomplished.  I would highly recommend fellow students take on this role in their own high schools.  It is amazing the difference it makes”.

We are excited to see the future unfold in this new program. Many thanks to the Canadian Progress Club – Halifax and the Gov’t of Canada for the funding of this great program.  Together we will #changethegame.

HALIFAX, NS, JULY 12TH, 2022 – Special Olympics Nova Scotia announces the Provincial Summer Games will be returning to the Antigonish at St. Francis Xavier University July 15 -17th. With more than 800 athletes and coaches attending, and over 300 …