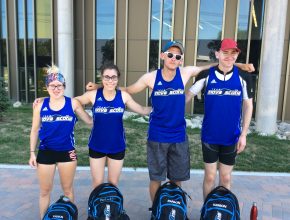 In the Fall of 2016 a dedicated group of athletes began to focus on something that would give them another great sport experience under a new umbrella – the Canada Games.  Four athletes from across Nova Scotia, under the direction of Peter McCromick, headed out to Winnipeg to compete against their fellow athletes from across Canada.

Each represented their province and team well and while not all medalled, all were “brave in the attempt” as they faced some tough competition from the other Provinces.

Here are the results:

Joy made it to medals finals in 100m and 200m and won Bronze in the 100 M and unfortunately while having the lead in the 200M she was DQ.

Donald made it 100M and 200M finals and was successful in securing a bronze medal in both events.

Sasha made B finals in 100 M and 200M and she came first in both and had personal bests in both.

“This group represented NS in a positive role both on the track and off the track. Many people commented on how positive and supportive our athletes were in cheering on all athletes from Nova Scotia.  As a coach I could not have been more proud of these four athletes for all the right reasons.  A special thanks to Sandra (mom of Joy) for her assistance during the competitions as well.” , says Canada Games Athletics Coach Peter McCormick.

Congratulations to all the athletes!  We are so very proud of you for not only your success, but for being the great team members we know you are.  There is nothing better than a group of Special Olympics athletes cheering on their team-mates.