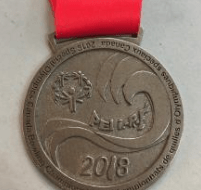 The PEI Bowling championships launched with fanfare on May 14th as a kick-off to the National Summer Games in Antigonish #SO2018, starting July 31st . Two members of Nova Scotia’s bowling team are familiar with winning, as Amanda Smith and Mark Deveau received gold medals in 2017 at the Provincial Games.

There is a lot of experience on this team, between Michelle Wilson, Mark Deveau, and Martin Fudge, they have 75+ years collectively as active competitors in the Special Olympics.

It was a great week of competition in Prince Edward Island!

The #SO2018 Bowling Championships will be held in Prince Edward Island from May 14-20, 2018. For more information, visit http://www.specialolympics.ca/special-olympics-pei-provincial-games/events/mon-05142018-0800/2018-special-olympics-canada-bowling.